In other words the larvae of the moth Ochrogaster lunifer, (Notodontidae) about which Moths of Victoria Volume 2 notes “Ochrogaster is believed to contain several species throughout Australia” and “For the moment Victorian species are included here under the name lunifer”
The streaked form is the one that has been encountered in the local area.

All images except verticals will enlarge with a click. 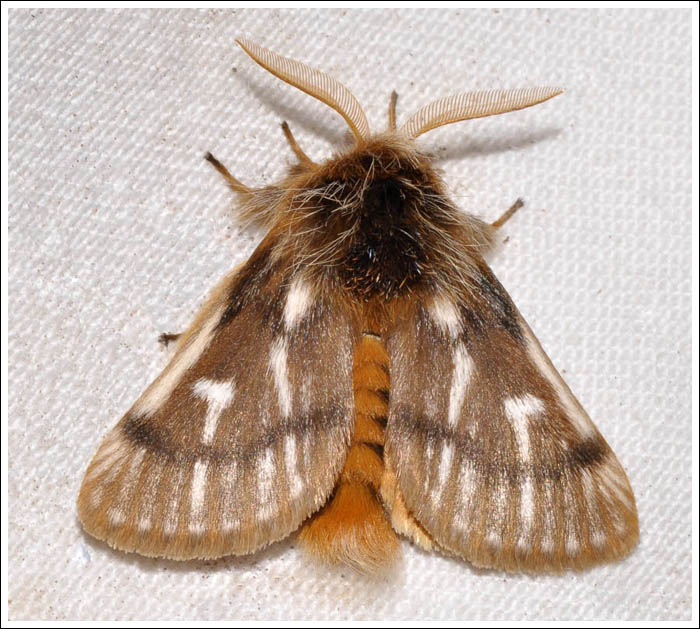 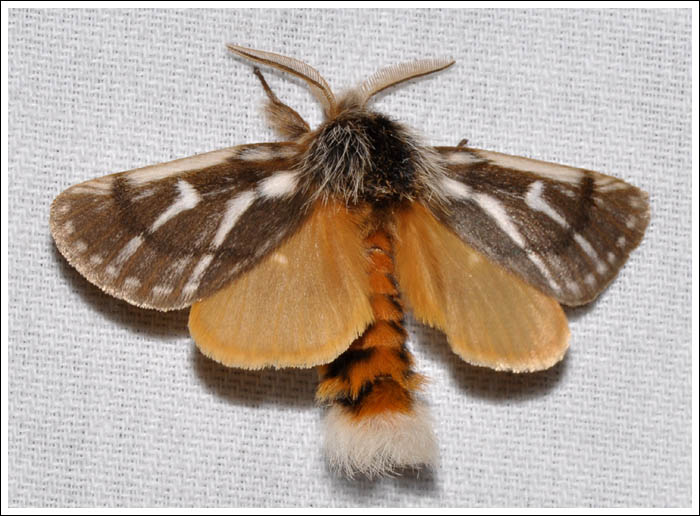 On his moth site, Don Herbison-Evans suggests that the types of shelters constructed may be pointers to different species, but more on that a little later. On a recent night in the box/ironbark bush, a look around with a torch while waiting for moths to arrive at the sheet paid off with the discovery of a procession of the larvae making their way up a tall Golden Wattle to feed on the foliage. All photographs were taken with the 100 mm Tokina macro lens, and of course flash. 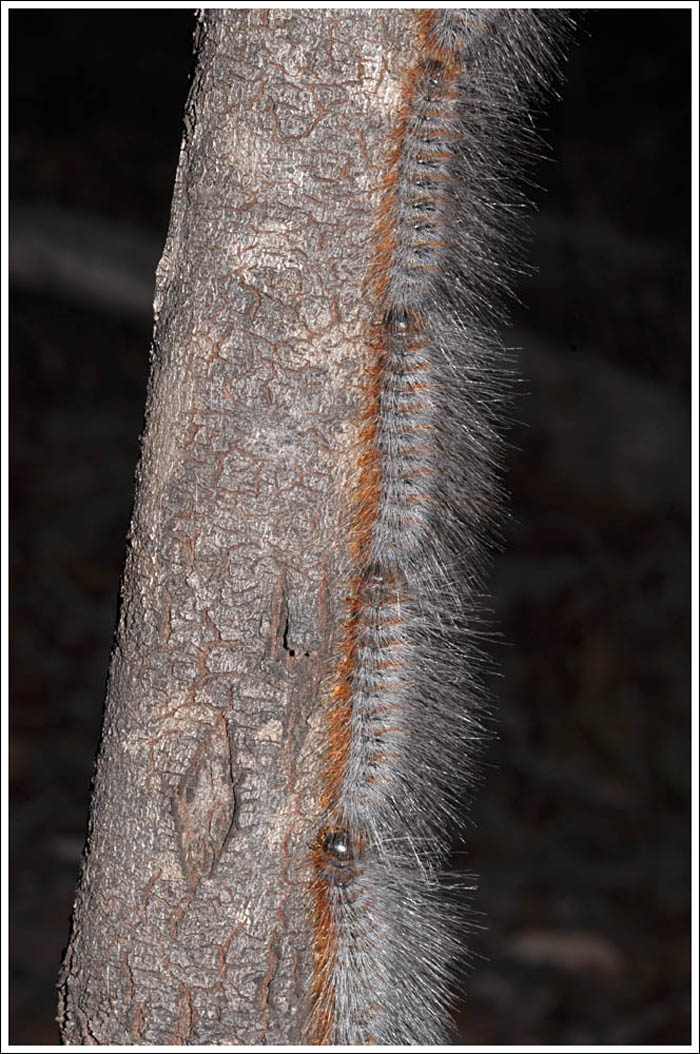 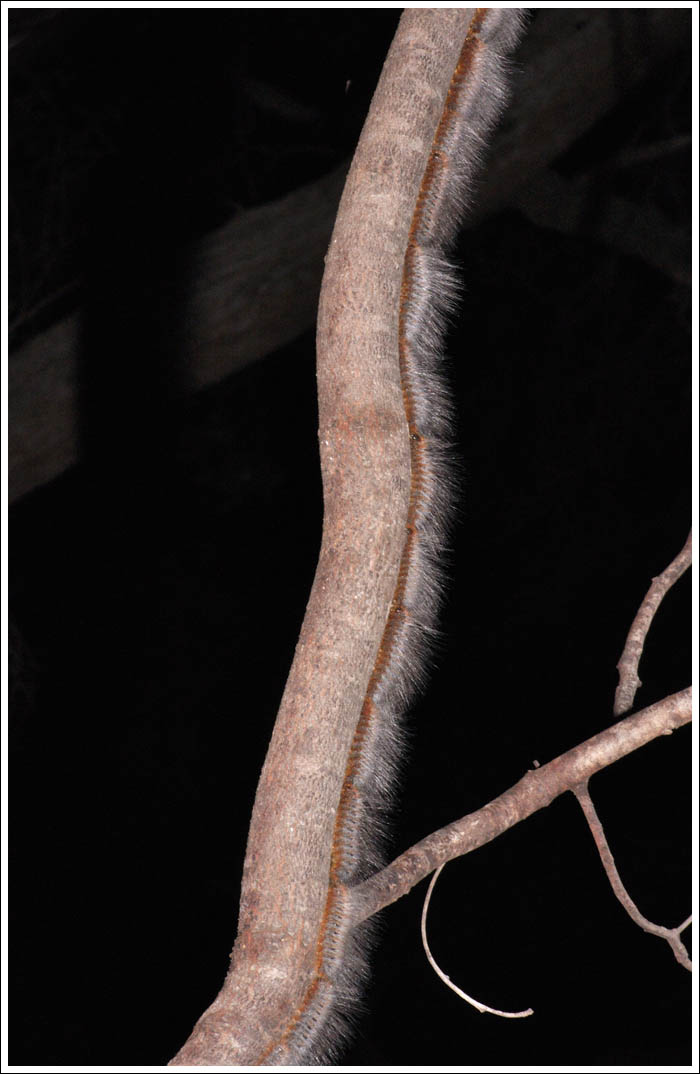 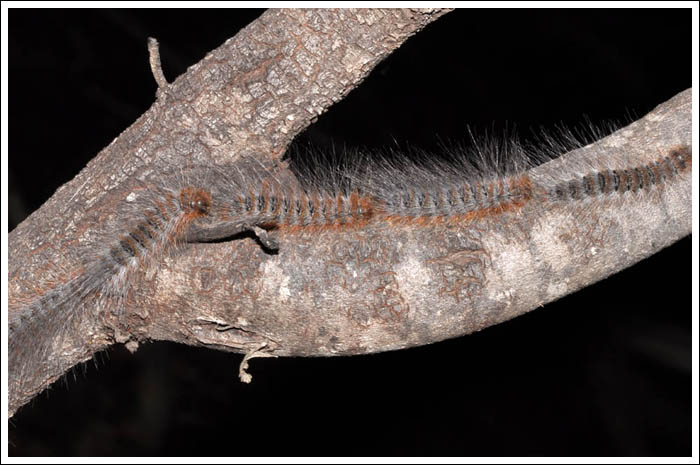 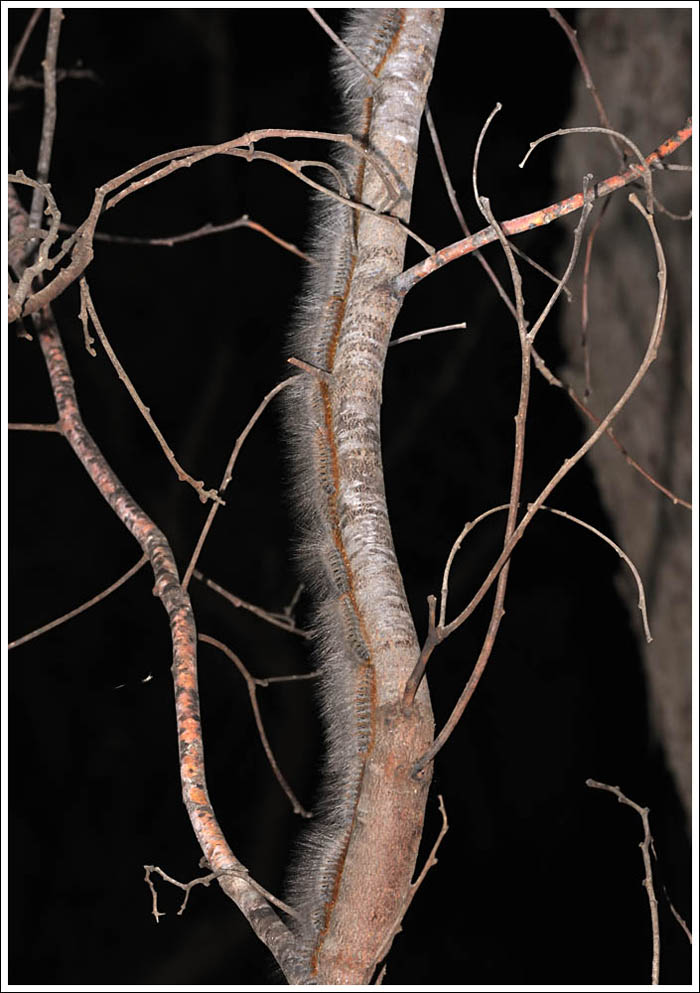 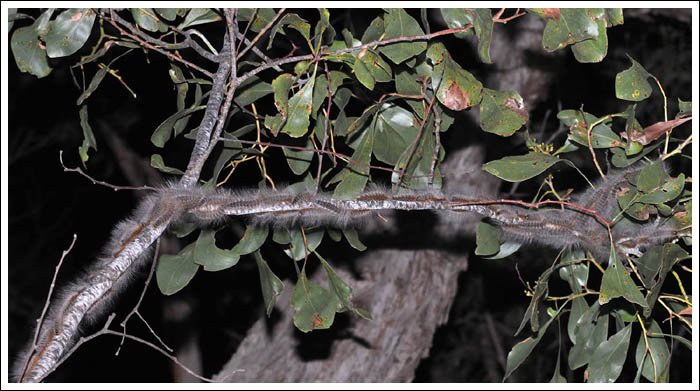 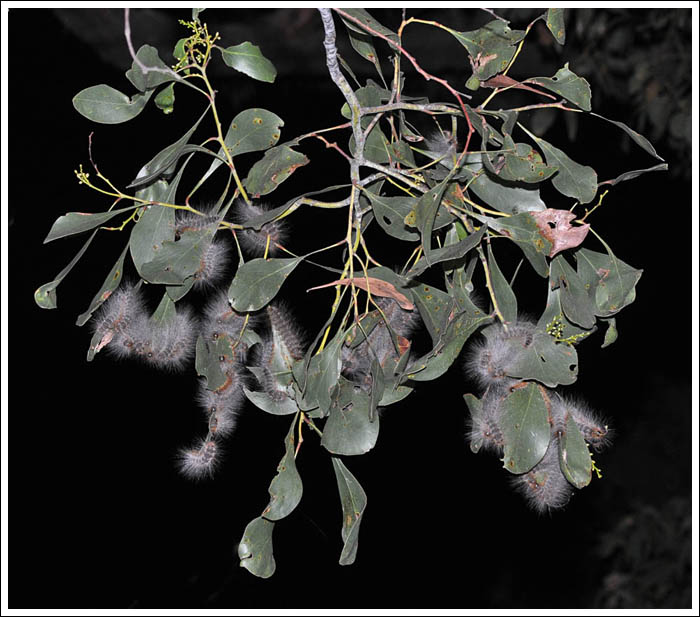 The caterpillars generally make bag shelters from silk, frass, and other debris, located either on the ground at the base of the tree, or up on the trunk or a branch. A return trip to the site was made the next day to further investigate, and there they were on the ground next to the trunk, in a tight group with no sign of any bag shelter. 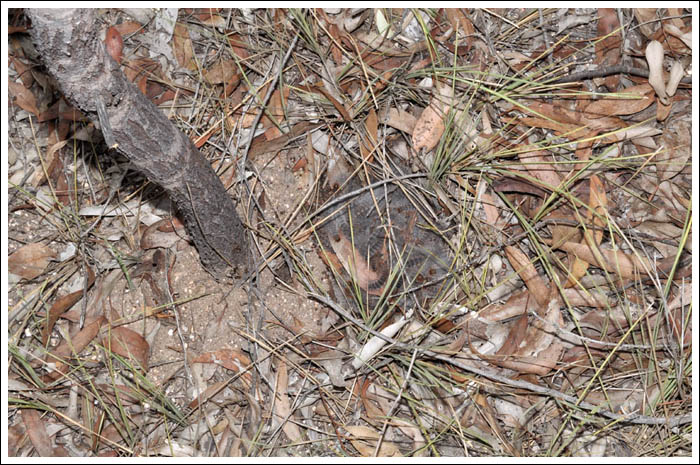 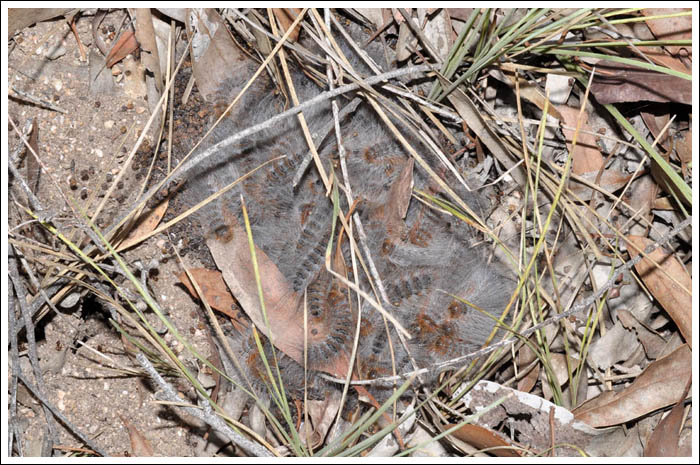 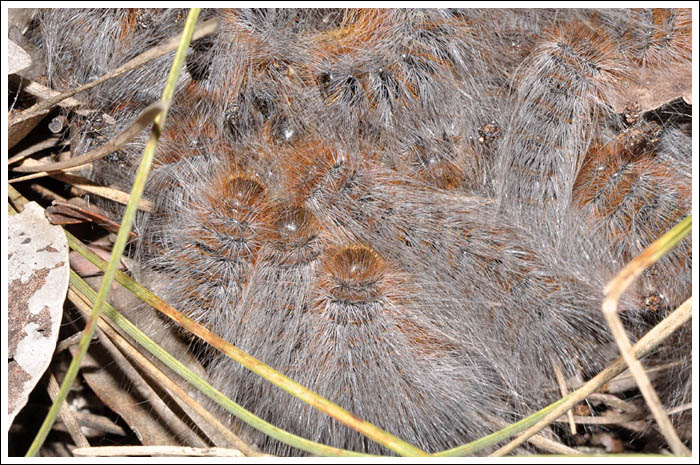 Is the lack of a shelter a characteristic of this particular local population? Who knows, perhaps the answer will be forthcoming sometime in the future after further study of the genus. And to repeat a previously published warning, neither the caterpillars or the moths should be touched, the barbed filaments they carry can penetrate the skin and cause urticaria and a number of serious conditions. Children are particularly at risk.

The subfamily Notodontinae has a larger number of genera than the Thaumetopoeinae, larvae of this group are not hairy but can come in a variety of strange shapes. Seven species have come to the light locally. the most common being the Two-coloured Notodontid, Sorama bicolor. 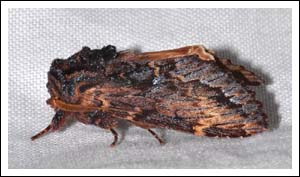 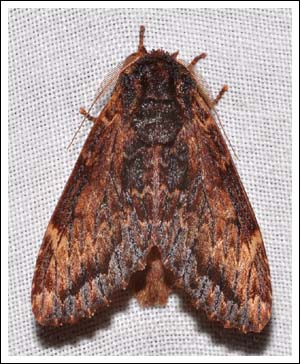 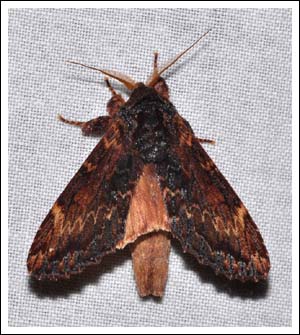 Also relatively common is the Streaked Notodontid, Destolmia lineata, this is a variable moth and more than one species may be involved. (MOV2). The larvae of both these species feed on eucalypts. 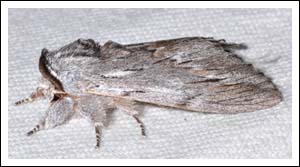 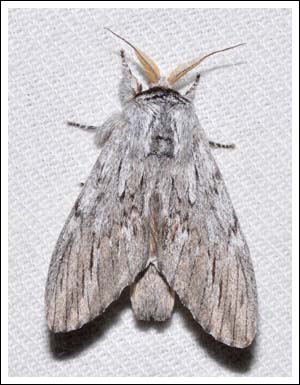 The Patterned Gallaba, Gallaba eugraphes  is a most attractive moth and always a delight to see at the sheet, it flies from October to April. Both the male and female have pectinate antennae, with the male’s much broader. 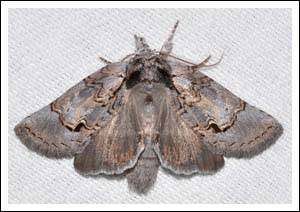 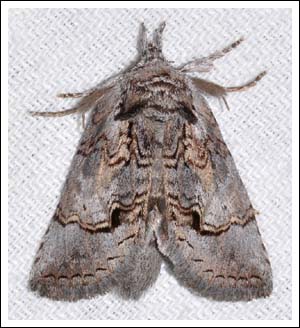 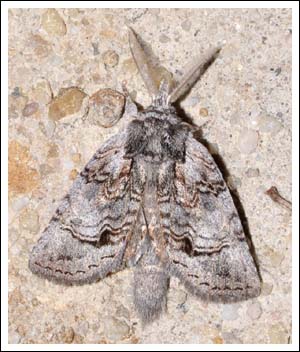 The Eastern Notodontid, Ecnomodes sagittaria is a moth that is distinguished from Ecnomodes sp(1), (MOV2), by the breadth of its antennae. Male and female moths came to the light at Valencia Creek East in September 2015. 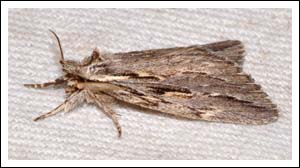 Psalidostetha banksiae, the Banksia Moth is quite beautiful, and has the habit of feigning death if handled. The larval food plants come from the Proteaceae family, Banksias, Hakeas, and Grevilleas for example. This moth was photographed in May 2013 at the Giffard Flora Reserve where there is plenty of Banksia serrata. 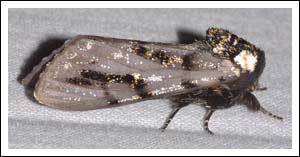 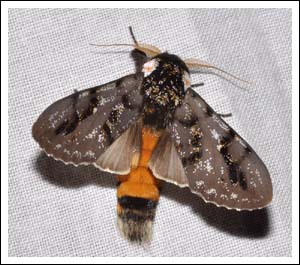 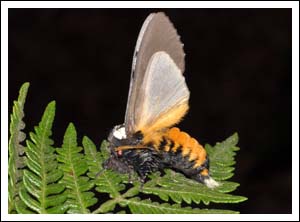 The Gum Rough-head, Hylaeora eucalypti flies mainly in autumn, it is an impressive moth and several came to the light in tall forest in the foothills in April 2012. the common name is very apparent in the first image, females all. The attractive larvae feed on eucalypt foliage. 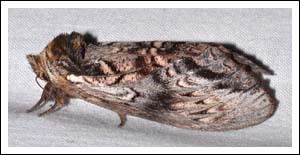 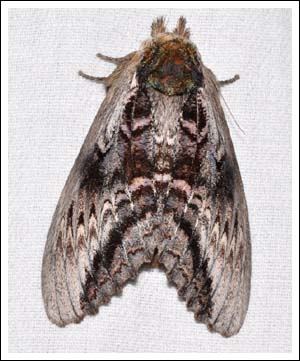 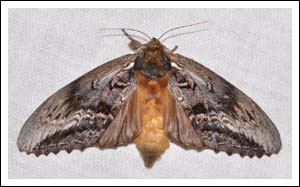 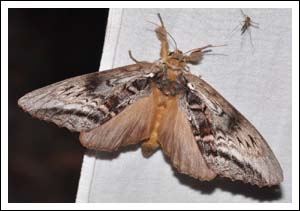 The final moth in this group is the Golden Notodontid, Neola semiaurata, named for obvious reasons. In January of this year several came to the light in box/ironbark country at Glenmaggie. The larvae of this moth feed on a variety of plants. 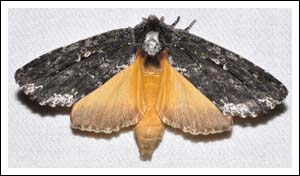 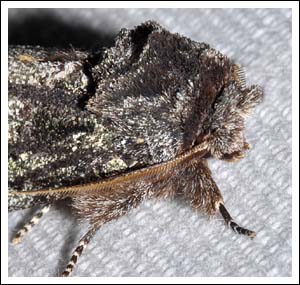